Colombia in the heart of Paris

The Kalios Group, founded by the Chantzios brothers, offers innovative catering services based on quality Greek products. They quickly joined forces with a chef known for his participation in the Top Chef show: Juan Arbalaez. Together, they set up the Eleni group with the desire to create differentiating food concepts, always inspired by strong cultural universes.

Chef Juan Arbalès, a native of Colombia, had a deep desire to share his culture and the cuisine of his country. This return to his roots was accompanied by the desire to create a modern place: make people travel in the Colombia of today, not the one of yesterday. In keeping with the general positioning of the Kalios group’s offerings, but also with the South American atmosphere, the concept had to convey a festive state of mind.

The mission was threefold:
• Find a location for this new restaurant
• To propose an architectural concept that honors Colombian culture
• Carry out the structural work and fit out the space

An opportunity quickly presented itself: a former Chinese restaurant on the rue de l’Ancienne Comédie. This place offered very interesting volumes, in a choice location. In the heart of the Saint Germain district and a stone’s throw from the market bar, it was arranged on two floors.

BAZURTO, COLOMBIA IN THE HEART OF PARIS

Bazurto is a district of Cartagena famous for its huge market in which you can buy (almost) everything! It represents very well the atmosphere we wanted to convey in the restaurant: a place of passage, in which one ends up lingering. A place that brings together all kinds of visitors, that immediately plunges into a rich and festive culture. It offers a stroll dotted with discoveries around the street food or street art. This effervescence is an endless source of inspiration for Juan Arbales.

For travelers, the market is always an immersive place, which offers an unforgettable experience. The restaurant Bazurto offers this same type of experience: when you walk in the door, you forget that you are in Paris, and you are carried away by the Colombian culture.

The general atmosphere retranscribes this frenzy and this bubbling proper to the Hispano-American cultures with rather hot colors, and raw materials for the warm and spontaneous aspect. We imagined an interior outdoor patio that allows us to create a terrace space in a street with a tiny sidewalk. It gives the impression of a balcony, typical of colonial houses. On the ceiling, typical pompons of the region set the tone: a place as rich in colors as in moments of sharing!

A first strong choice was anchored in the very layout of the premises. The two floors allowed us to imagine a place with two offers, addressed to two targets with two distinct atmospheres. A dynamic that also echoes the Saint Germain neighborhood: a very mixed neighborhood, with a very well-to-do population, but also with a whole student life looking to party. Saint Germain is also the historical district of artists in Paris, with mythical places that are more than restaurants: places of meetings and exchange.

On the first floor, we find a bar accessible to all, with a festive atmosphere. We come there to meet with friends, drink, eat delicious tapas and party. We find an arty and bohemian Colombian universe with neon atmospheres or a bar made of recycled materials. The idea is to give the impression of being in a bar in Cartagena; crossroads of cultures and stopover on the road to India. A city that reserves many mysteries and surprises, in which one accepts to be surprised and taken to new experiences. An almost mystical atmosphere that can be found in the restaurant Bazurto thanks to the frescoes that decorate the walls below and that illustrate chimeras half-human half-animal that metamorphose into wild animals at night. A work realized by the Colombian street-artist Alexandra Arango which enriches the authenticity of the scenography.

On the second floor, a change of universe: this is the restaurant reserved for the initiated, where you can find a population of rich notables who like to mix with the festive atmosphere of the working class neighborhoods. The restaurant offer is more premium: people come here to discover Colombian cuisine and to sit down to eat. But as with all Eleni concepts, the party is never far away: it starts on the tables and continues at the bar! The decoration is colonial inspired in the style of Cartagena, with rattan seats and lighter and brighter colors than on the lower floor.

TO FACE MANY TECHNICAL CONSTRAINTS

Beyond the architectural concept, Bazurto was a titanic construction site with numerous technical constraints. The removal of the existing building revealed serious structural problems that could damage the very structure of the building. We were able to count on the expertise of our engineers to accompany the owner in heavy structural work.

Our second major challenge was to carry out a complete soundproofing of the restaurant. 80% of party restaurants have closed in the last 10 years, largely due to neighborhood complaints. Since the restaurant’s concept is based on a festive atmosphere, it was essential to solve this problem. So we created an acoustic envelope inside the place: on the walls, on the ceilings and on the floor. A box within a box with all the constraints of a building sitting on the foundation walls of the city of Paris.

As in any restaurant, the kitchen is a major issue, especially when the chef decides to cook on a wood fire. This third technical issue led us to collaborate with 3 independent design offices to guarantee the feasibility and total control of the project.

Bazurto is an invitation to escape, in a mythical district of Paris. From the street, its patio makes it look like a secret address. Between bohemian culture and colonial culture, it offers two trips to the same country: Colombia. 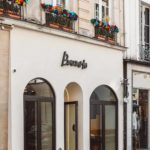 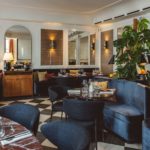 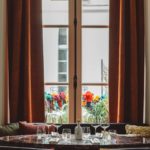 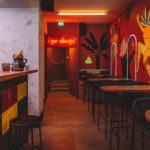 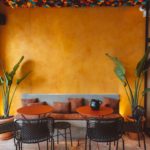 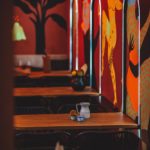 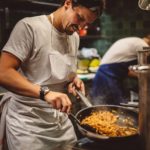 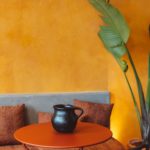 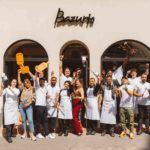