Synapture is a software publisher that offers a data sharing tool that allows to exchange files between collaborators, or customers, with simplicity and complete security.

Strong values are expressed in their business to their way of working: innovation, practicality, the spirit of collaboration and of course, exchange. Composed of about twenty people, the company accompanies diverse high-end customers.

In 2019, Synapture acquires 220m2 offices at 10 rue Saint Nicolas, on two levels with 4 independent entrances: two courtyard and two street side. Between Bastille and Gare de Lyon, this space is in a lively and very central area.

The company moved in quickly, but unfortunately, at the beginning the magic did not work: the place was occupied by a service company. The atmosphere was not welcoming with its false ceiling, its blue carpet, and its impersonal side. The employees and the brand did not feel at home in this cold environment.

The first challenge was to make this place a pleasant working environment for employees on a daily basis. For two reasons, the objective was also to make the brand’s DNA be felt: to federate the employees and reinforce the employer brand because Synapture welcomes its customers in its headquarters.

The axis of response was then articulated around three strong values specific to Synpature :

The Synpature team is mainly made up of two professions: salespeople and developers. Two daily lives and ways of working that differ on one crucial point, the noise. The former spends a large part of their day on the phone, while the latter need peace and quiet.

To solve this problem, the space was divided into two levels, one for sales and one for the developer:

In addition, the 4 independent entrances offer a real independence for each space.

This need for compartmentalization had to leave room for team spirit and the feeling of being «together». The transparency between the different spaces has allowed us to create a collaborative atmosphere. Employees can see each other from the developers, the salespeople, or the corridors area.

SUBLIMATE THE EXISTING TO CREATE MODERNITY

Formerly used for surveys, the premises were very sanitized. The removal of the partitions allowed us to discover many assets: wooden beams on the ceiling, stone walls and a carriage door.

These elements served as the basis of inspiration for the architectural concept. The modernity is perfectly expressed by putting itself in front of the old: by highlighting the materials and the elements present with sobriety, the space becomes warm and pleasant.

On the first floor, natural tones have been used, mainly white and wood. In the basement, the wood also creates a contrast with the stones and a particular attention was paid to the lighting: the arches are backlit by directable spotlights with the possibility to vary them.

CREATING AN EXCLUSIVE ATMOSPHERE BY KEEPING IT SIMPLE

Synapture often receives clients in its offices, with this high-end dimension, that had to be reflected in the interior design. If the desire was to create a pleasant workspace for employees, the perception that emerged had to remain expert and serious to create reassurance for the client.

Carpet inlays in the meeting rooms in the basement and cooper element on the first floor were used to create a more high-end atmosphere. Velvet was used in the room that serves as both a dining room and an after-work meeting place, with the possibility to vary the lights to the moment.

The high end of the range is only found in small touches and is more apparent through a clean and sober style than through flashy elements. The ambition was to be faithful to the brand, with a modernity and a premium positioning that transpire precisely by their simplicity. 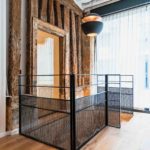 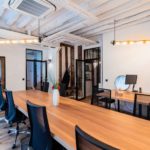 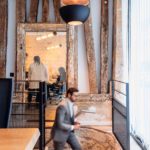 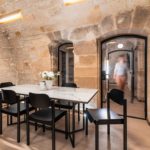 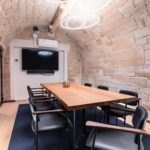 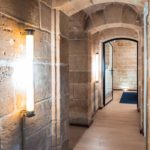 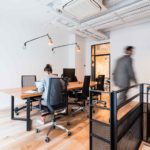 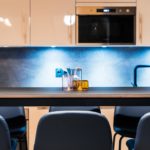 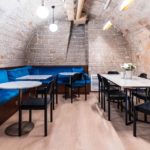